Two Critically Endangered species of marine turtles nest on beaches of Seychelles, including Aride. Green Turtle breeds only in significant numbers in the outer islands, while Hawksbill is more frequent on protected beaches of the inner islands. 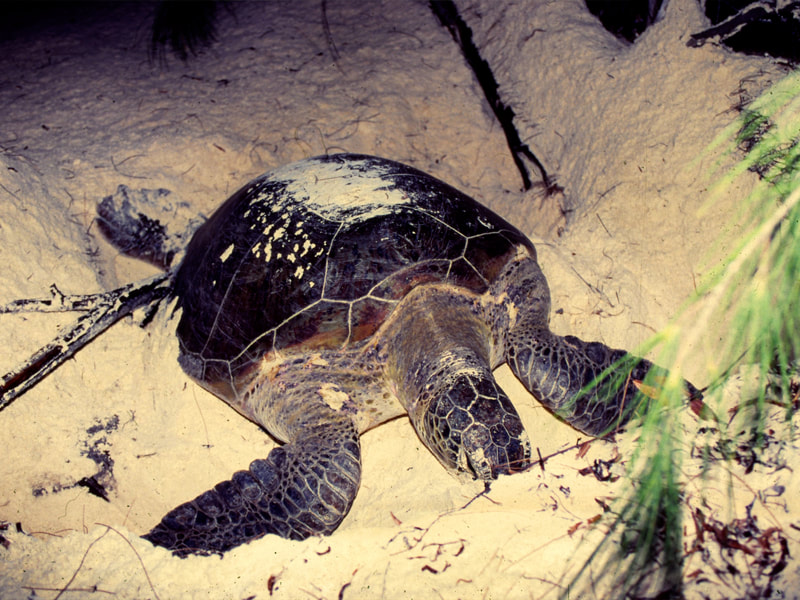 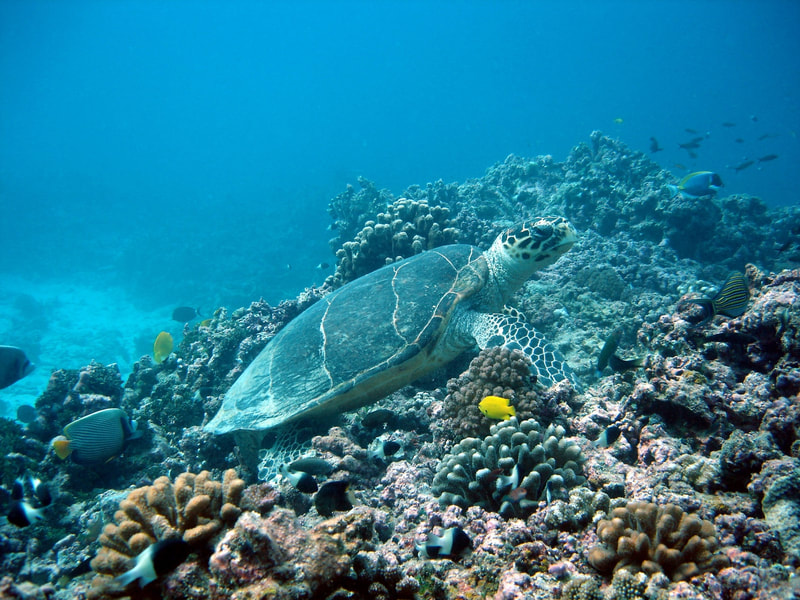 Green Turtle Chelonia mydas (left) are much less frequently encountered in the granitic islands compared to Hawksbill, but significant populations breed at some outer islands. It breeds mainly at the opposite time of year to Hawksbill. Numbers of this Critically Endangered species have been greatly reduced throughout the islands due to overexploitation for their edible flesh. They are also vulnerable to boat strikes, fishing net bycatch and the use of fish aggregation devices. Females emerge to nest at night, returning to beaches at about 14-day intervals up to five times per season and laying 85-200 eggs each time.
DID YOU KNOW?
Adult green turtles are the only sea turtle species that is entirely herbivorous, feeding mainly on seagrasses. They help to maintain the health of seagrass beds by grazing on the tips of seagrass blades.
Hawksbill Turtle Eretmochelys imbricata (right) are medium sized sea turtles, characterised by large overlapping scales on the carapace and a tapered head with a protruding hooked upper beak. They feed mainly on sea sponges but also take various species of invertebrates. They are Critically Endangered and the granitic islands of Seychelles host some of the most important populations in the world. Females show strong site fidelity to beaches such as that of Aride, returning to nest at two- to five-year intervals and laying about 160 eggs perhaps four times per season (September to March) at intervals of 15 to 18 days. Incubation lasts about 60 days.
DID YOU KNOW?
Seychelles is one of just three places in the world where female hawksbills lay eggs during the day. Unfortunately, this puts them at risk of being taken by humans for their highly prized shell. Data gathered by Dr Jeanne A. Mortimer of ICS shows that at every unprotected island, numbers have declined since the 1980s but at every protected island such as Aride, they have increased.
Return to Marine