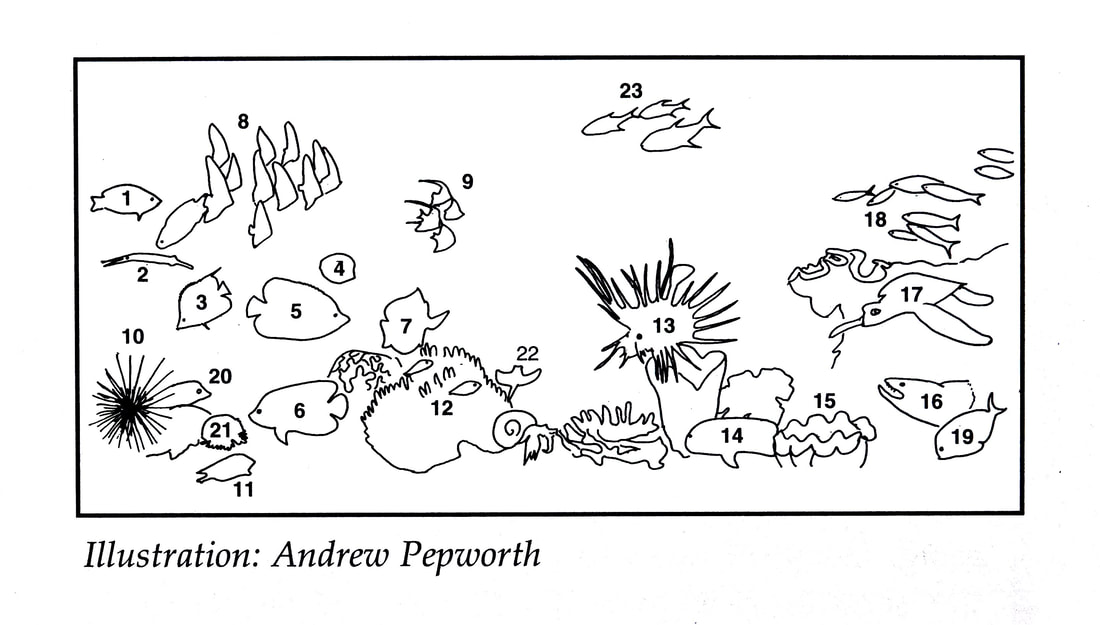 Nothing can prepare you for the wonder of swimming over a coral reef for the first time. Once away from  the swirling sand and surf and over the living corals, you enter a new world. Over 1,000 species of fish have been recorded on Indian Ocean reefs, a diversity unequalled in any other ocean. Most of the reef fish are herbivores, such as the Parrotfish (1) which have bony “beaks” to graze the algae on the coral surface. As they graze, they gnaw off chips of coral; the expelled fragments that have passed through their gut help create the wonderful coral sand beaches of the tropics! Below this is the strangely elongate yellow Trumpetfish (2). The Threadfin Butterflyfish (3) and Racoon Butterflyfish (4) are territorial and pair for life; they aggressively defend one patch of coral where they feed. The larger Emperor Angelfish (5) and Royal Angelfish (6) are more skulking, vanishing beneath coral heads when approached.
Juvenile angelfish (7) can look completely different from the adults. Behind them in the deeper water, hangs a school of the strangely-shaped Batfish (8), deep-bodied but wafer-thin; their yellow pelvic fins show up underwater like chicken legs and earn them the Creole name Pouldo (“water chicken”). To their right and farther out are a group of Moorish Idols (9). Note the black sea-urchin (10) bottom left – stay clear of these. Also, beware this attractive Cone Shell (11); never attempt to pick one up as they can fire a poison dart from the tiny vent at the end. In the sea anemone at the centre left are a couple of Skunk Clownfish (12). They avoid predators by hiding among the stinging tentacles but are never stung themselves. The long streamers of the Lionfish (13) also hide poisonous spines; beware! Below is an Oriental Sweetlips (14), a shy fish of slightly deeper water. Note the Giant Clam (15) next to it, and the young Guineafowl Moral Eel (16) in its coral lair. Swimming over the coral is a turtle, a young Hawksbill (17). Behind it a school of Blue and Gold Fusiliers (18) race by close to the surface. At bottom right is the Powder-Blue Surgeon (19). All surgeonfish have scalpel-sharp hooked scales at the base of their tails to deter the larger predatory fish. Also pictured are a Boxfish (20), Eyed Cowrie (21), Round-tailed Ribbon Ray (22) and Bluefin Trevally (23). Over 400 fish species have been recorded in the waters surrounding Aride.