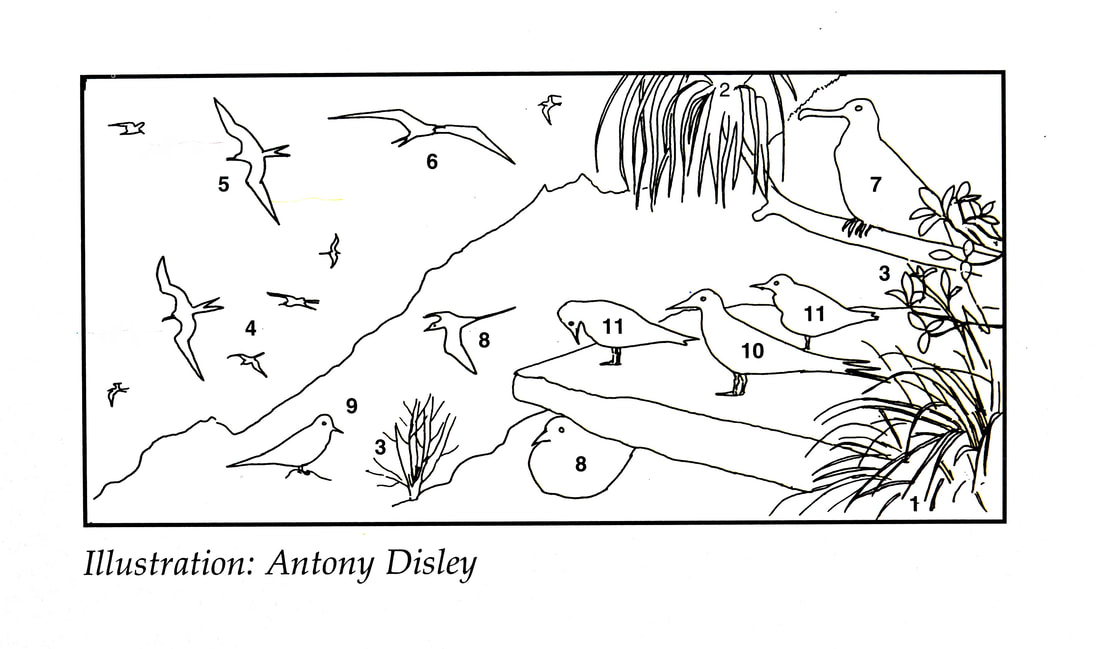 After a steady climb, the track emerges onto the hilltop at Grolatet (“the big head” in Creole). The summit is 134 metres (over 400 ft) above sea level. To the south are the main islands, to the north is nothing but ocean, nearly 2,000 miles to the coast of India. There is little soil in this terrain and only the hardiest plants like the tough Enteropogon grass (1) can survive. Notable plants include the endemic Balfour’s Screwpine, Vakwa Bordmer (2) also grows here and the sparse shrub Tangen Rouz (3), a kind of Euphorbia with a stinging white sap. Over the northern cliffs the most noticeable seabirds are the huge frigatebirds (4) fly. With a 2 metre (6 ft) wingspan, a tail like a swallow, a long hooked beak like a condor and feet like a pigeon, this is a most remarkable bird. The nearest breeding site is Aldabra, over 700 miles to the southwest, but birds disperse north to the granitic Seychelles. Between October and December there may be over 3,000 frigatebirds roosting on the northern cliffs of Aride. When the day heats up they soar out over the sea, harrying the larger seabirds until they disgorge the fish they have been carrying. There are two species, the Lesser Frigatebird (5), a male in this case), and the Great Frigatebird (6) which tends to predominate. The red throat pouch of the male is inflated during the breeding season. Immature birds (7) have white or buff-coloured heads and a white chest patch like the females. Here, too, the Red-tailed Tropicbird (8) may be found, although sightings are rare. The Bridled Tern (9), which nests in crevices under rocks, and its larger cousin the Sooty Tern (10, an adult) are also much in evidence from the hilltop. By October most of the young Sooty Terns (11) are ready to leave, returning to the open ocean. They may be several years on the wing before they are mature and return to Aride to lay their first egg.