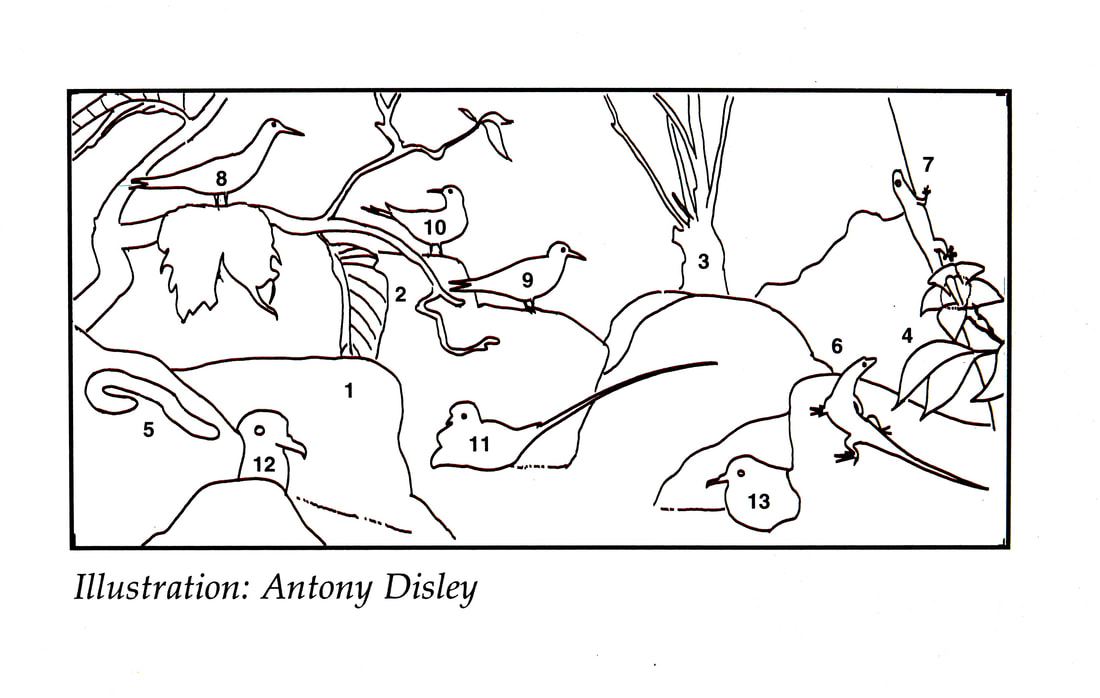 The number of seabirds on Aride is awesome, including the world’s largest populations of Tropical Shearwater and Lesser Noddy. Aride is composed of granite around 750 million years old, which weathers into massive standing blocks (1). Close to strong sea currents where great fish concentrations occur, the island must always have been an important seabird roost. Over the centuries, accumulated bird droppings and fish debris created sufficient soil for plants to colonise. Leaf litter then contributed to a soil now deep enough to support a thick woodland cover composed of Pisonia trees (2), figs (3) and the unique Wright’s Gardenia, Bwa Sitron (4), found in its natural state nowhere else. It erupts into gloriously scented flowers 10 days after heavy rain. Pisonia makes up the bulk of the woodland cover and is typical of seabird islands. Not only are its flat branches and floppy leaves ideal for nesting, but its sticky fruits are spread by adhering to birds’ feathers. The woodland is home to invertebrates including the Giant Millipede (5) and lizards, notably the Seychelles Skink (6), the Green Day Gecko (7) and the Wright’s Skink. In April there is an explosive increase in fish numbers offshore. This triggers the start of the breeding season for seabirds like Lesser Noddy (8), Brown Noddy (9) and Roseate Tern. The Lesser Noddy gathers the damp, dead leaves of Pisonia to build its platform nest. The Brown Noddy nests  either on granite ledges or in the crowns of coconut trees. The Roseate Tern makes a simple scrape on the woodland floor; with about 200 pairs this is the most important breeding site in Seychelles. All three species feed their young on small baitfish that occur in vast numbers between May and August. White-tailed Tropicbirds (11) feed farther offshore on squid and flying fish, so they can nest year round. Two types of shearwater also nest in burrows in the loose soil; the Wedge-tailed Shearwater (12) and the smaller black and white Tropical Shearwater (13). They come in only after dark and depart again before dawn; on dark nights the woods echo with their ghostly wailings and shrill cackles.
Return to Wildlife