TALES FROM THE PAST 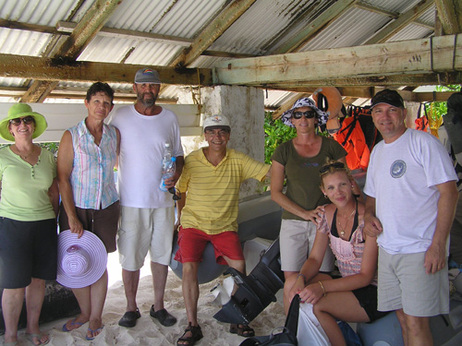 Jacques Morel (3rd from left) and family
How many times do we say to each other: “I wonder what it was like in the past?’  Here on Aride it is common topic of conversation, and in September 2011 we had a visit from a man who brought the past alive for us:  he told us stories of a time when Seychelles was utterly different from the way we live today.

The world has changed so fast in recent decades that it is easy for us to forget how swiftly life has altered.  We fly between islands, send documents at the press of a button, chatter to friends thousands of miles away on mobiles, and live (or at least some of us do!) in air-conditioned houses with light, power and communications at our  fingertips.

Ironically, here on Aride our whole mission is about preserving the past. We are privileged to be guardians of a tiny piece of the natural world almost unchanged for thousands of years. Aride is one of the few islands remaining on the planet where the past remains visible, a fragment of the world as it was before Man.  Here, through the vision of a few farsighted men we have saved a native forest, an almost intact assemblage of native fauna and an unrivalled population of seabirds so tame we can still gaze at them face to face with mutual wonder.

But Aride, though it lies on the northern edge of the granitic archipelago, has been changed by the coming of  explorers, pirates, administrators and plantation owners. Proof of this came in September with a remarkable man who made a visit to Aride with his Australian family.  His name is Jacques Morel and the minute he came up the beach he had us enthralled with tales of the old days, and the island he remembered as a boy. At that time his father, Charles Morel, was the owner of Aride. He had inherited it from his father Victorine Morel, son of Maximilien Morel,  a French citizen who, with his wife,  was banished to Seychelles during an ill-fated uprising on Réunion.  He established a cotton plantation on La Digue, and his son came to own Aride some time around 1831. In those early days of the 19th century, Aride supplied little more than eggs and meat from the seabirds that nested here in their tens of thousands.  Marianne North who visited in 1883 wrote of the owner selling meat pies made from Aride seabirds!  The island that Jacques remembers must have changed little from that time: a painting by Marianne North shows the tiny village at La Cour with wooden huts with roofs and walls made of palm leaves. Jacques remembers visiting Aride as a small boy in the early 1950s, and says that even then the houses of the workers were still made of wood, with a roof of palm thatch made of Latanier leaves brought from Praslin. He remembers 15-20 men working on the island, several with families, and the main work was the collection of coconuts for the copra trade.

By that time coconuts were planted all over the hill, which means that the native forest which now grows all over Aride must have been cleared and cut annually. To allow them to collect the coconuts from the ground, they needed to cut the sprawling herb Manz Tou (Asystasia) and teams of men would cut and clear this from one end of the island to the other. All the water then came from the well next to the marsh: “It was sour” said Jacques, “if I think about  it, I can still taste it now!”  Food crops grown were pawpaw, banana and pumpkin and the only light after dark came from hurricane lamps (“Chinese lamps, we called them” he says). But his most vivid memory is of the day, once a fortnight, when the coconuts were carried across to Praslin  in the big island pirogue.  It had curved prow and stern, was broad and deep in the middle to hold all the nuts, and was rowed across the 10 miles to Praslin by burly men, hauling on huge oars 10-15’ long. Jacques remembers the huge bulging arms of the rowers and how he and his boyhood friend put their tiny hands on the big oars to pretend that they were rowing too! The big takamaka pirogue was all-black, painted with bitumen to seal it, but even so, halfway to Anse Kerlan, they might run the boat up onto a rock like Ilot Fou, so that the boys could burrow through the coconuts and use a half  Coco-d-Mer to bail out the water that had seeped in.  What memories: takamaka pirogues rowed to Praslin,  water lifted from wells by buckets, light from hurricane lamps, houses of wood and palm thatch.

Now jump forward 50 years: fibreglass RIBs powered by outboards, running water and showers from hill water tanks, light from generators and solar power, houses of concrete and corrugated iron, communication via laptop and mobile phone! The whole world has changed in that time, with the building of an international airport on Mahé,  the death of the copra industry, independence for Seychelles, and the growth of tourism.  And this has brought Jacques and his family back from Australia to visit what is now one of the finest nature reserves in the Indian Ocean, still with forest and seabirds intact. We are thankful that both Jacques and the wildlife of Seychelles are still in good health. Thank you Jacques, for sharing such vivid memories with us  here on Aride.  Long may you, your family, and the glory that is Seychelles, flourish!
Return to History
Share