Ten species of seabird have been recorded breeding at Aride (mainly at the plateau and hillside woodland habitats), more than at any other Seychelles island, including the world’s largest colonies of two species. In addition, huge numbers of two non-breeding frigatebird species may be seen all year-round, especially at the hilltop, the largest frigatebird roost of the granitic islands. 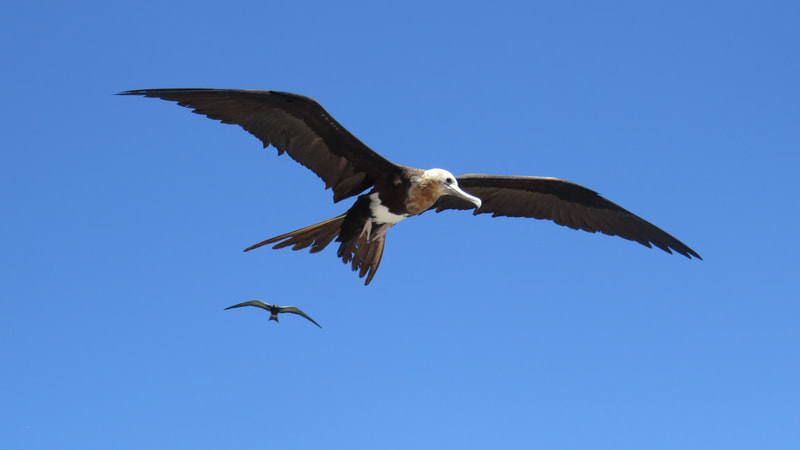 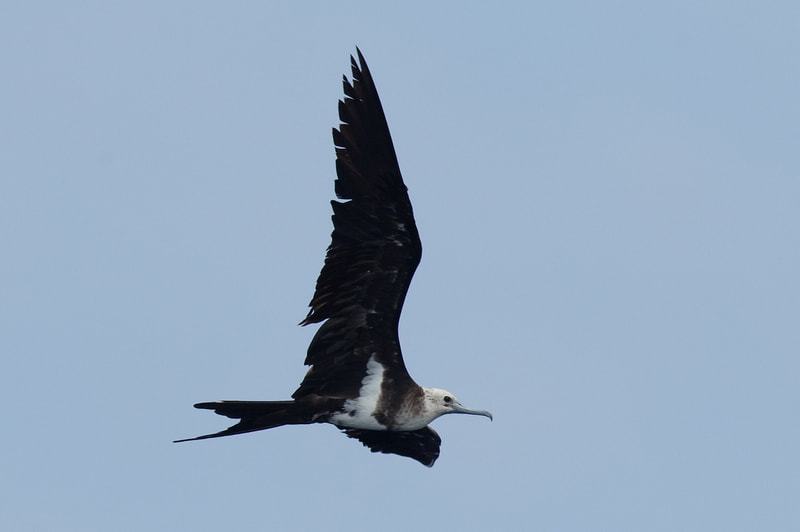 Great Frigatebird Fregata minor (above left) is by far the more common of the two frigatebird species to be seen at Aride. The island holds the largest roost in the granitic islands. This species is most easily identified by its all-black underwing, whereas in Lesser, white spurs extend to the underwing.  Lesser Frigatebird F. ariel (above right) is also somewhat smaller than Great Frigatebird, but this is difficult to assess in natural conditions. Both species breed at Aldabra. Small numbers of Great Frigatebird also breed at Cosmoledo. Most Aride birds are immature; breeding males, which have a bright red inflatable gular sac are rarely seen. Frigatebirds will attack other seabirds to force them to drop their catch or take their own prey on the wing.

DID YOU KNOW?
Males and female frigatebirds have very different plumages, a very rare feature in seabirds. In avian history, this is a relatively recent trait to appear, despite frigatebirds seemingly primitive appearance. No birds take longer to reach maturity than the frigatebirds: they do not breed until 10-12 years of age.  Frigatebirds have the longest breeding cycle of any bird, a full 12 months, taking a year or more off between successful breeding attempts.

Frigatebirds are unable to land on the surface of the water because they have small, unwebbed feet that do not give them sufficient thrust to take off again and in addition, their plumage is not waterproof. However, they are maestros of flight. Unlike any other group of birds, the pectoral girdle bones are fused together, acting like a rudder and giving great strength and agility in the air. They have the lowest wing-load factor (ratio of total weight to wing area) of any bird. They are surprisingly light (only 600-1,600g), with pneumatic flexible bones that make up just 5% of their weight: another record, being less than any other bird. 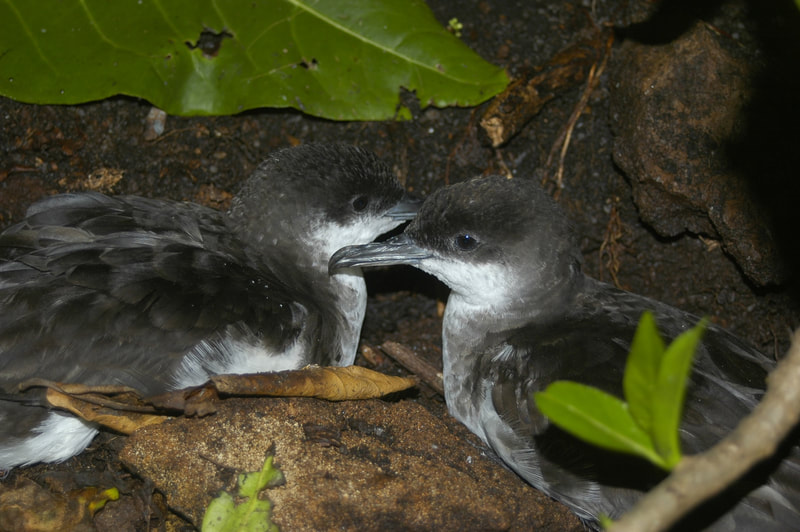 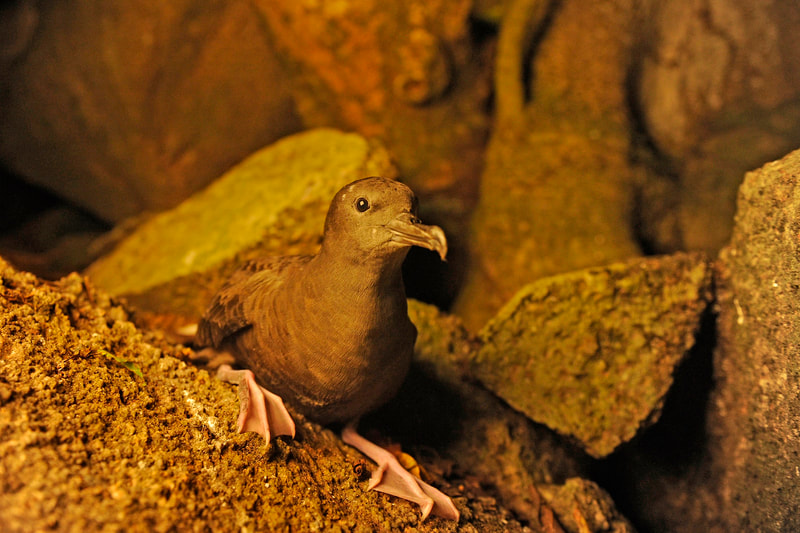 DID YOU KNOW?
Research by Island Conservation Society at Aride using GPS devices to track movements show that birds often travel up to 150 kilometres from Aride to feed at the eastern edge of the Seychelles Bank. 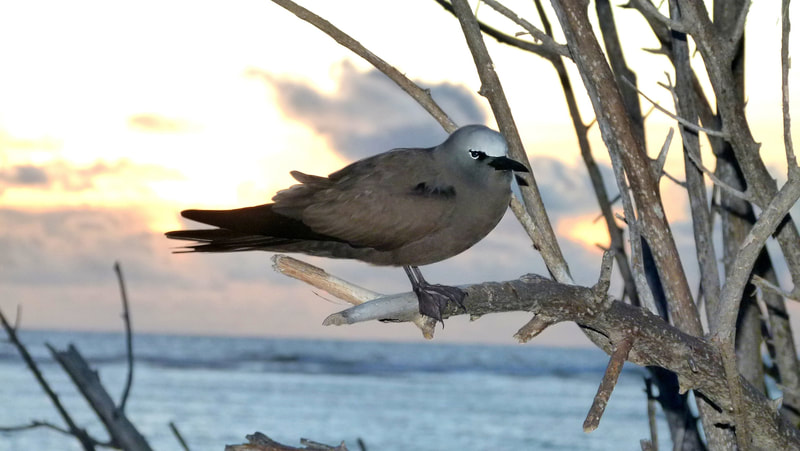 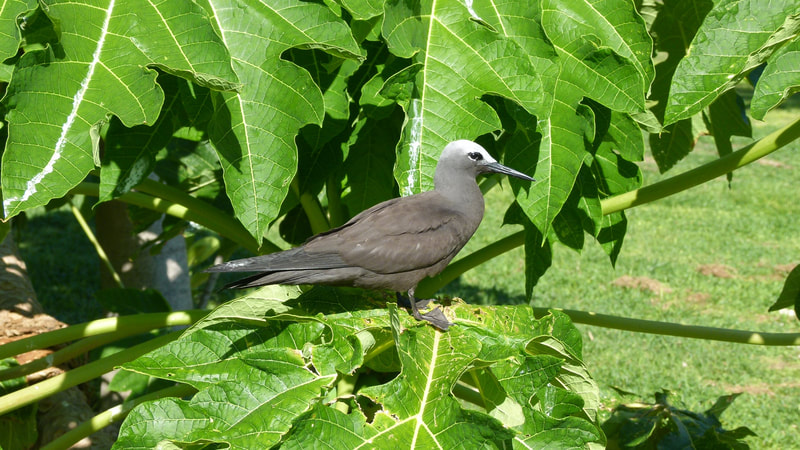 Brown Noddy Anous stolidus (above left) is a robust all-dark brown tern with a whitish cap. The adult has a greyish-white forehead and crown sharply defined in front of the eye, unlike the smaller Lesser Noddy A. tenuirostris (above right) is a lighter all-dark tern, the grey crown and nape merging evenly at the lore giving a gentler appearance.  The bill is finer and proportionately longer than Brown Noddy.. They are among the most common seabirds of Seychelles.

The Creole name of Brown Noddy is Makwa is said to have been derived from the dark colour of the plumage for this bird, similar to the African Macoa race. Slaves of this race were brought from Mozambique to the Mascarenes in the 18th Century. Local names of Lesser Noddy include Kelek and the Creole expression la mon’n kelek, is sometimes used meaning 'I'm famished'.

DID YOU KNOW?
Aride is home to the world's largest colony of Lesser Noddy. The English name ‘noddy’ refers to the courtship displays of these birds, in which they nod their heads to each other. 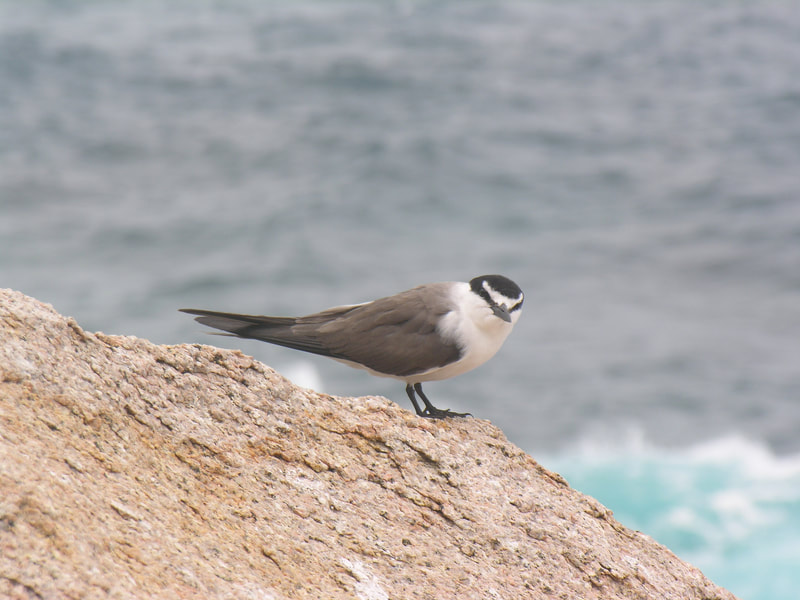 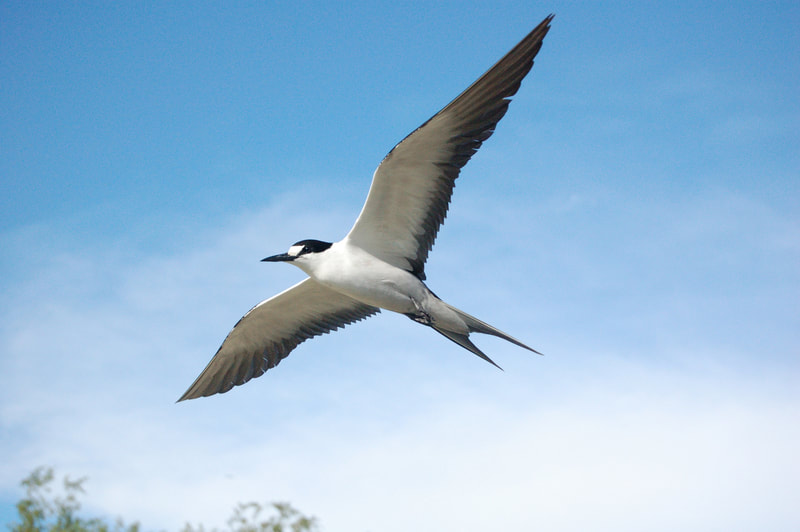 Sooty Tern Onychoprion fuscatus (above right) breeds in Seychelles in larger numbers than any other bird. It is a fairly large mainly black-and-white tern with long tail streamers. Colonies are very noisy places day and night. Birds are present at Aride mainly in March to October and this is the largest colony of the granitics. Sooty Tern eggs are still collected for consumption. The Aride colony is protected by law but suffers from poaching. Bridled Tern O. anaethetus (above left) is a smaller version of the Sooty Tern, paler browner and less uniform above than Sooty and shorter-winged. At close range, the white forehead extends behind the eye as a narrow white supercilium emphasising the black line through the eye and a black stripe continues to the gape with even width.  The Creole name is Fansen and the local expression parey fansen lo labour koko (like a Bridled Tern on a coconut husk) means someone holding onto a treasured possession (it is often seen perched on objects at sea such as a floating coconut).

DID YOU KNOW?
Remarkably, Bridled Tern breeds in an 8-month cycle at Aride and elsewhere in Seychelles, whereas in other parts of the world it has an annual cycle.

Geolocators and satellite tracking of birds has revealed the long journeys made by Sooty Terns outside the breeding season, some even visiting the western borders of the Pacific Ocean. in 1995, a Sooty Tern arrived to breed on Aride that had been ringed as a chick on Kermadec Islands, New Zealand in 1961 (a distance of 13,350km from Aride). 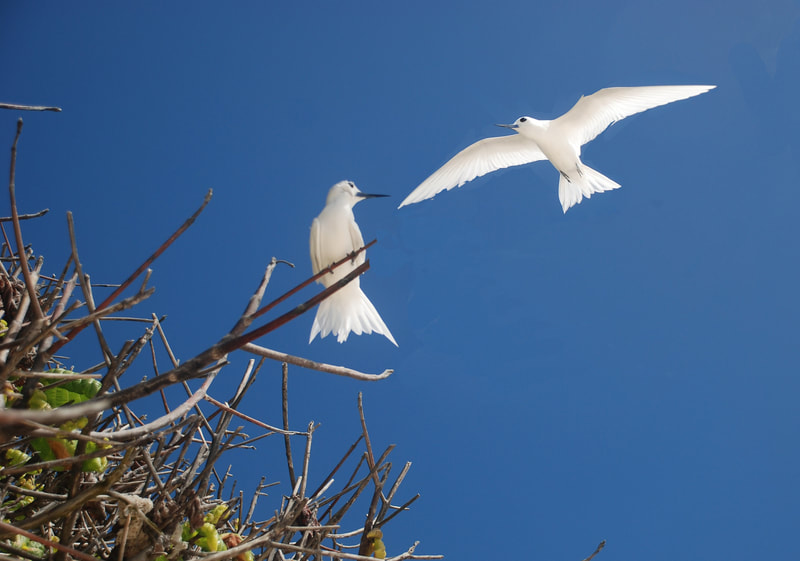 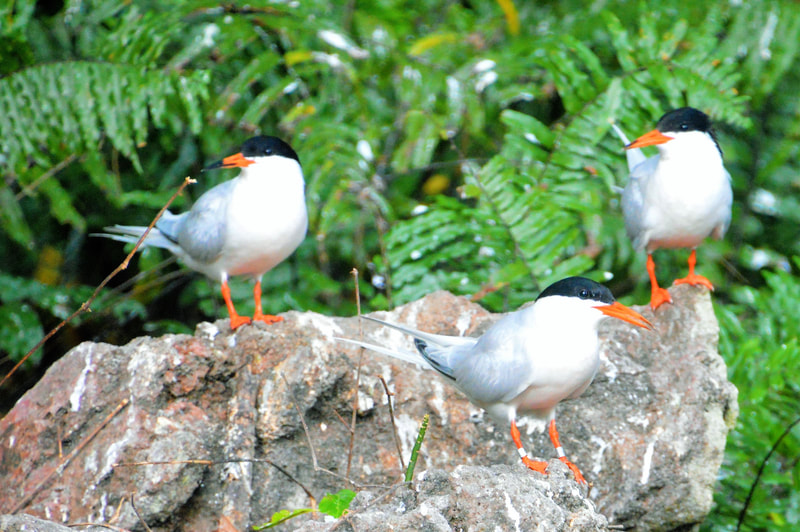 DID YOU KNOW?
Fairy Tern was effectively first named by Charles Darwin. In Voyage of the Beagle he remarks, "There is one charming bird: it is a small, snow-white tern, which smoothly hovers at the distance of a few feet above one's head, its large black eye scanning, with quiet curiosity, your expression.  Little imagination is required to fancy that so light and delicate a body must be tenanted by some wandering fairy spirit..."
Clearly, this was a Fairy Tern.
DID YOU KNOW?
Taxonomy is uncertain, but if recognised, the race of Roseate Tern present in Seychelles is named arideensis, after Aride. Geographical variation in races mainly involves bill colour and arideensis has the least amount of black on the bill of any race during the breeding season, supporting recognition. It was once more common and widespread. The protection of Aride is vital to its survival in Seychelles. 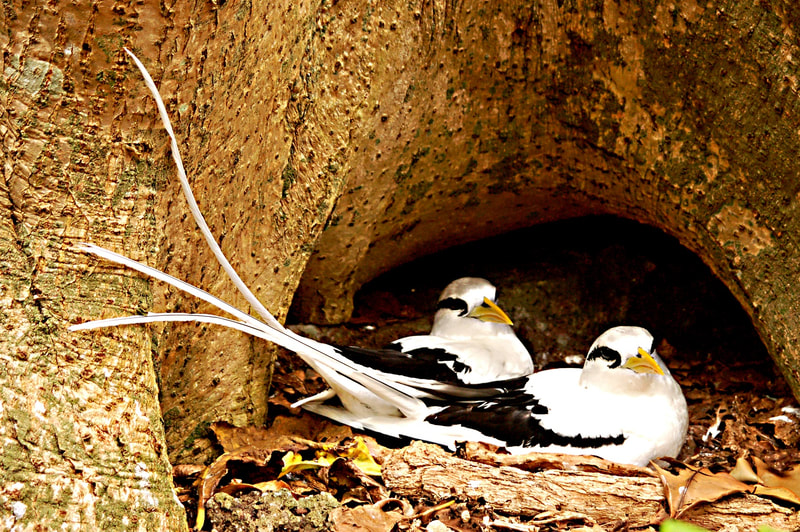 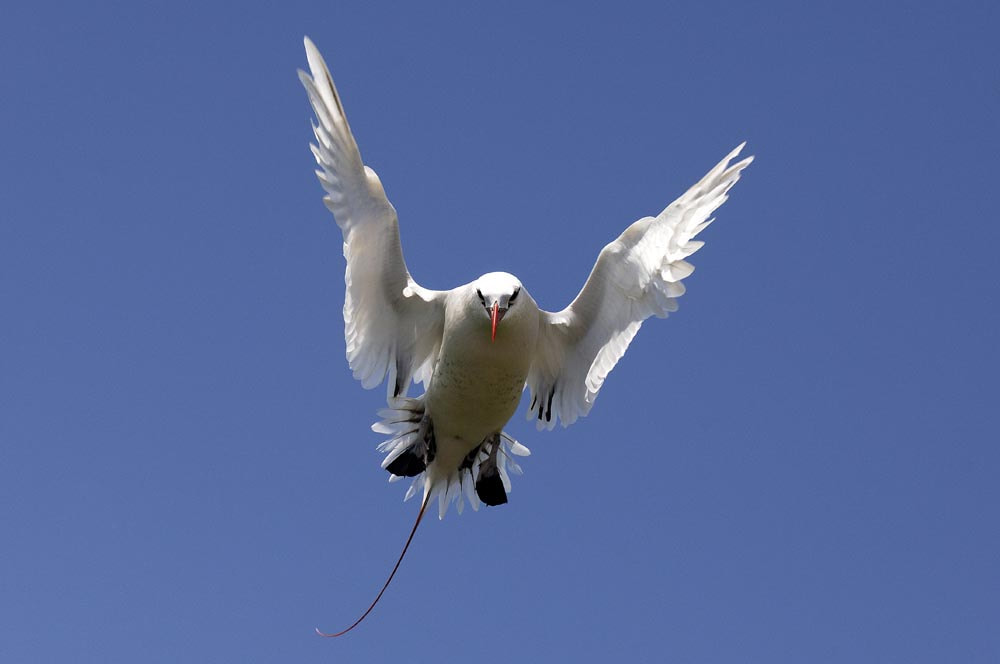 DID YOU KNOW?
Genetic evidence shows tropicbirds are an ancient lineage. Their placement within the avian tree remains uncertain but somewhat bizarrely, they are placed tentatively closest to the Kagu Rhynochetos jubatus endemic to New Caledonia and Sunbittern Eurypyga helias of Tropical America.