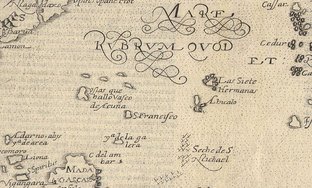 1771 map of the western Indian Ocean
Aride Island first appears on charts drawn up by Chevalier Du Roslan aboard the Heure du Berger, visiting between December 1770 and February 1771 . The first written account we have is from 1787 by Jean-Baptiste Malavois, French commandant of Seychelles, who described it as “…no more than a pile of rocks covered with a few bushes.” Malavois also noted there was no regular source of fresh water, though a small marsh did form in the centre of the island during the rainy season. He refers to the fact that the landing was difficult, and could be made on only one beach, which remains the case today. In a list of islands that in his opinion could support settlers and their families, Aride is not mentioned. It is therefore probable that it was not granted to anyone until much later, after the more desirable islands had been occupied.

The first proprietor, Mr. Victorine Morel, is named in 1831. Aride was most likely no more than a sideline for Mr. Morel, who was a member of a very prominent landowning family whose main estates were on the much larger island of La Digue. He was a descendant of Maximilien Morel who along with others was deported to Seychelles from the French colony of Réunion in 1798 after an uprising. Maximilien had settled on La Digue. His wife joined him and they had prospered, so that upon their death in 1815 their children inherited 108 acres of land, a crop of cotton worth 132.72 pieces of eight and twenty five slaves, the most valuable commodity of all. “Morel, fils & Victorine” are listed in an ‘Abstract of Slave Population in the Seychelles, 1826’ as owning 25 plantation slaves in 1815, and Victorine alone also possessing six personal slaves in the same year. 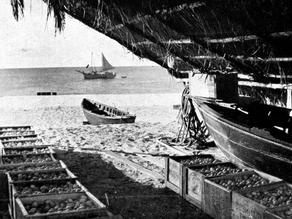 Sooty Tern eggs were once collected and exported from Aride
Early interest in the island appeared to centre on exploitation of the large seabird population amongst the produce were shearwater chicks, frigatebird breasts, and eggs, mainly of Sooty Terns. There was also a small plantation on the plateau, which has always been particularly fertile, cultivating crops such as cotton, maize, beans, tobacco and coffee. Mr. Morel is mentioned as the proprietor of Aride in a letter from the British Government Agent, George Harrison, to his superiors in Mauritius. Mr. Harrison had just paid a visit of inspection to Curieuse Island where a new leper colony had been created by the government in 1829 and he was surprised to find a leper, a slave by the name of Confiance, still living on Aride and being cared for by one of Mr. Morel’s slaves. Confiance, who did not belong to Mr. Morel, was apparently in no hurry to join his fellow sufferers on Curieuse. He “had no ulcers and seemed so well contented that he did not feel inclined to accompany Dr. Ray to Curieuse.”

In October 1817 the authorities had conceded Curieuse Island to Mr. Sérèies who was to have the jouissance or use of it. At that time there were already lepers settled there and presumably the new proprietor objected to their presence. Harrison states in the same letter that in 1818 they were shipped en masse from Curieuse to Aride, which was probably still without a proprietor to protest against the move. Between the years 1817 - 1829, when the British government established the new asylum on Curieuse, Aride was possibly therefore an unofficial leper colony; the contented Monsieur Confiance having been left behind when the others were transferred back to Curieuse two years before Harrison’s visit.

Sadly Aride now sinks back into obscurity for thirty years, leased by a succession of proprietors from prominent local land owning families, including the Lablaches, Payets and Adams who would have used the island in much the same manner as Mr. Morel had done. In 1861 we know the island had a population of  just two persons. This suggests the owners were using it for little more than the exploitation of the seabirds for meat and eggs, which they would sell on the larger islands; a valuable source of protein when seas were too rough to permit the fishing boats to get to the fishing grounds. Outside the nesting
season a population of two was presumably sufficient to protect the owner’s rights and keep out unwanted visitors.

Seven years later, in 1868, when Dr. Edward Perceval Wright visited Aride, things had changed. The plateau had been cleared and was producing “good crops of cotton and excellent melons”, but apart from this agricultural endeavour he, like Malavois eighty years before, found the island to be “little more than a  collection of large rocks,” although he does also mention the “countless myriads” of birds resident there. He was the first naturalist to explore Aride, and gave his name to a large skink (now Wright’s Skink) and a shrub unique to Aride, the Bwa Citron or Wright’s Gardenia (Rothmannia annae). He was temporarily appointed medical officer during his stay in Seychelles, and was responsible for the leper colony on nearby Curieuse. 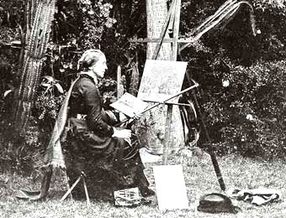 Marianne North, Victorian traveller and paintress
Aride was evidently still a barren place. Marianne North, an intrepid Victorian botanical artist, visited in 1883 and  described it as “that scorching island”.  There was only “one big green tree”, a Badamier, under which everyone huddled for shade. However, she also mentions that the island produced bananas, pineapples and other tropical fruits, so it must still have been relatively fertile. The painting she did on Aride, (now in the North Gallery at Kew, London), shows young coconut palms growing on the plateau. Seychelles had entered the age of the coconut when copra and coconut oil were the islands’ major export. Landowners planted them everywhere they could on their estates, the view being prevalent that land with no palms growing on it was almost worthless when you came to sell it. It is therefore not surprising that by 1940 when the island was visited by the ornithologist F.N. Betts, the plateau was “thickly planted with tall old coconut palms with an undergrowth of bananas and fruit trees.”

Although coconuts were planted in the 1920’s and 1930’s wherever the depth of soil permitted the island did not, like many others, become blanket coconut plantation from beach to mountaintop. Betts reported that on the hillside, in pockets of soil, maize, beans and water melons were still grown, and a wide range of fruits and vegetables were produced on the plateau, but elsewhere on the island the vegetation was kept short, presumably deliberately, to facilitate the nesting of the sooty terns and the collection of their eggs. He described these areas as covered in “rank, coarse grass, a couple of feet in height, hiding tumbled screes of rocks and boulders.” One former manager recalled that annual coppicing was established routine by the 1920’s when his father was the island manager.

During Wright’s visit in 1868 the men of his party alone captured and ate nearly two hundred fat young birds in two days. Fifteen years later Marianne North recollected that the island’s proprietor made very good money selling pies filled with seabird meat. By Betts’ time, considerable numbers of Wedge-tailed Shearwaters were being killed, dried and exported to Mahe, along with Frigatebirds which were knocked off their roosts with long poles, and Noddies which were caught in mid-air using string whips or sticks as the birds hovered around the island boats offshore. In 1940 the war had no doubt given extra impetus and profitability to the exploitation of this resource. Restrictions on shipping meant the population of Seychelles suffered many privations.

In the longer term, it was Aride’s harvest of Sooty Tern, and to a lesser extent Brown Noddy eggs, that became the main source of income for its proprietors. In the earliest record we have, 200 cases of eggs, with 700-750 eggs per case, were taken from the island in 1931. Between 1948 and 1967 a probable average of 171-173 cases were exported annually from Aride, and there was a peak of  312 cases (or 225,000 eggs) harvested in 1954. Of course many more eggs even than these would have been taken by resident workers and by poachers. After 1975, when approximately 32,000 eggs were gathered, no more eggs were officially collected from Aride.

The Chenard family were the island’s owners in 1967 when it was decided Aride was no longer commercially viable and it was hoped it might be sold to  someone who would protect the remarkable wildlife still surviving there. Without the annual harvest of seabird eggs the island was difficult and expensive to protect. It was sold in January 1973 to Mr. Christopher Cadbury, who after visiting Aride had realized that it was a site of global importance to seabird populations. He was a founder and member of the British-based conservation organization, the Society for the Promotion of Nature Reserves (now the Royal Society of Wildlife Trusts or RSWT) and he presented the island to the organisation to ensure its future protection as a nature reserve. In 1979 Aride was given Special Reserve Status by the Seychelles Government. This makes the destruction or disturbance of any living thing on the island, or any habitat there, an offence under the law. Since 1984 the island has been scientifically monitored, with an ongoing research programme administered by professional full time scientists. 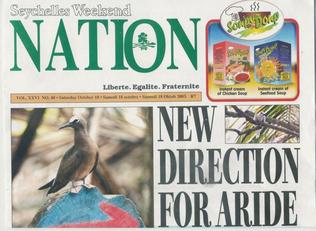 "Seychelles Nation" front page headlines, 18 October 2003
In October 2003, Aride took a new direction when RSWT decided to localise responsibility for the island. ICS were chosen as the best local guardians for the islanbd and a three-year lease was signed in 2004. After successful completion of a long list of conservation amd management targets, the freehold was granted to ICS in 2007, and ownership passed to our associated UK Registerd Charity, ICSUK.  Today, the islands few permanent inhabitants are all engaged solely in the ecological management, conservation, and restoration of the island . Because of this work, and the work of many others before us Aride is now one of the finest tropical island nature reserves in the world.
Share