FLORA & FAUNA OF ARIDE
Seabird citadel of the Indian Ocean 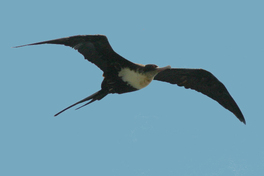 Aride Island: "Where the frigates fly"
Over one million seabirds breed on Aride, including the world's largest colonies of Lesser Noddy and Tropical Shearwater, the world’s only hilltop colony of Sooty Terns and the western Indian Ocean’s largest colony of Roseate Tern (race arideensis, named after the island). There is the only breeding colony of Red-tailed Tropicbird east of Aldabra and huge numbers of Brown Noddy, Fairy Tern and Wedge-tailed Shearwater. From the magnificent vantage point on the northern cliffs, thousands of Great Frigaebird and Lesser Frigatebird soar, the only place in Seychelles where so many of these birds can be closely encountered at eye-level. 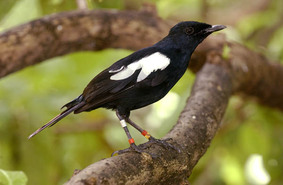 Seychelles Magpie Robin, a conservation success story
Five species unique to Seychelles breed on Aride. This includes the world's largest population of Seychelles Warbler, the enigmatic Seychelle Magpie Robin, once dubbed the rarest bird in the world but now well on the way to recovery. Seychelles Fody also breed here and on just a few other islands, together with Seychelles Blue Pigeon and Seychelles Sunbird. 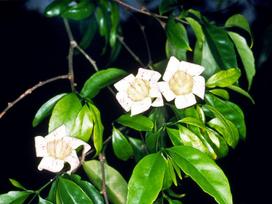 Aride's floral emblem: Wright's Gardenia
The island is largely covered in native woodland, including Wright's Gardenia, a shrub with beautifully scented flowers found naturally nowhere else in the world. There is also a Peponium species (from the cucumber family), possibly another Aride endemic. The island has one of the highest densities of lizards in the world including 3 species of skink, 3 species of gecko and a species of harmless snake. Two species of endangered marine turtle, Green and Hawksbill regularly nest on Aride’s beaches. 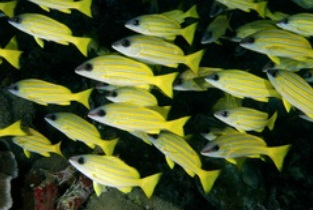 Blue-lined Snappers
The reserve boundary extends 200 metres offshore, protecting a beautiful coral reef and its associated marine life. Over 400 species of fish, from Whale Sharks to Flying Fish have been recorded in the waters surrounding Aride.