The Western Indian Ocean contains 16% of the world’s coral reefs. There are about 300 to 350 species of coral belonging to 68 coral genera in Seychelles.  34 coral genera from 14 families occur on the coral reefs around Aride.  As corals grow, they begin to take certain shapes or forms known as growth forms. Each stony coral can be classified by one of these growth forms. 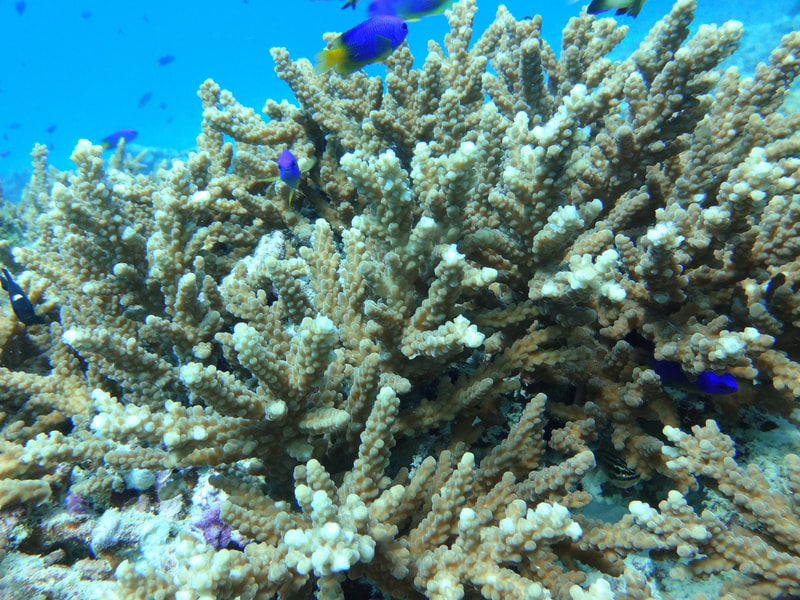 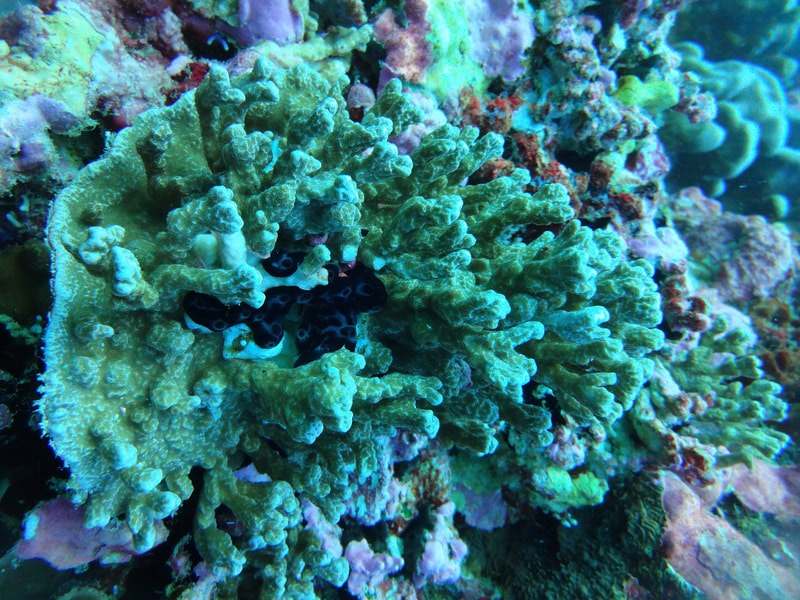 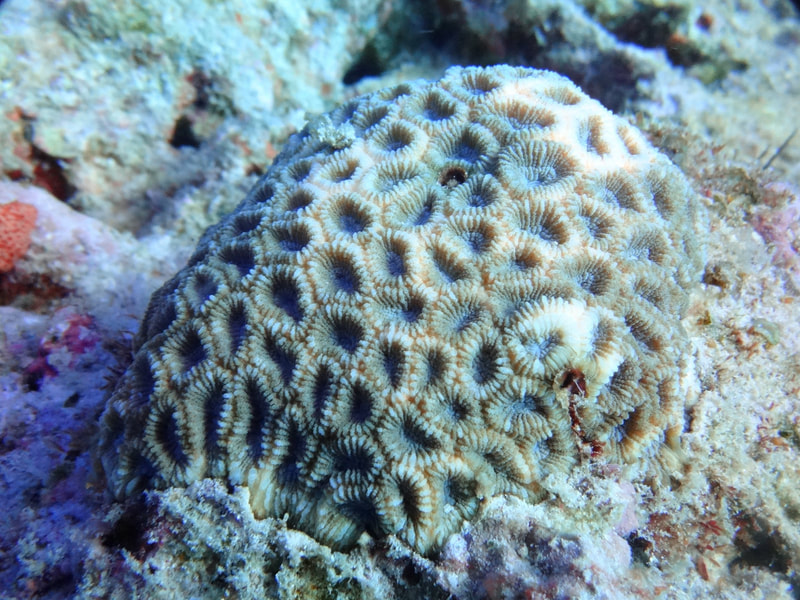 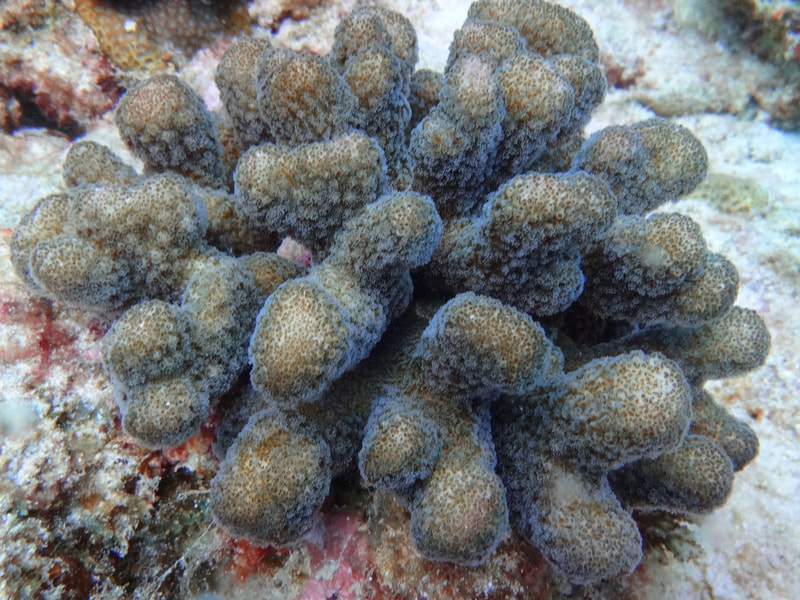 Just like a tree, these corals form primary and secondary branches. They are fragile corals and their branches can break off, but they can use this to their advantage. Branching corals can use fragmentation, a type of asexual reproduction, to create new coral colonies. These corals typically have faster growth rates than other growth forms. Some Acropora species can grow up to 30cm in one year.

DID YOU KNOW?
The most abundant genus of branching corals is Acropora, with over 100 described species in the Indo-Pacific. All hard-coral species have corallites, but Acropora corals have one larger, distinct, tubular corallite on the tip of each branch. This is called an axial (or terminal) corallite and is unique to Acropora. Aride hosts a significant heat tolerant stand of Acropora austera along the southern forereef. 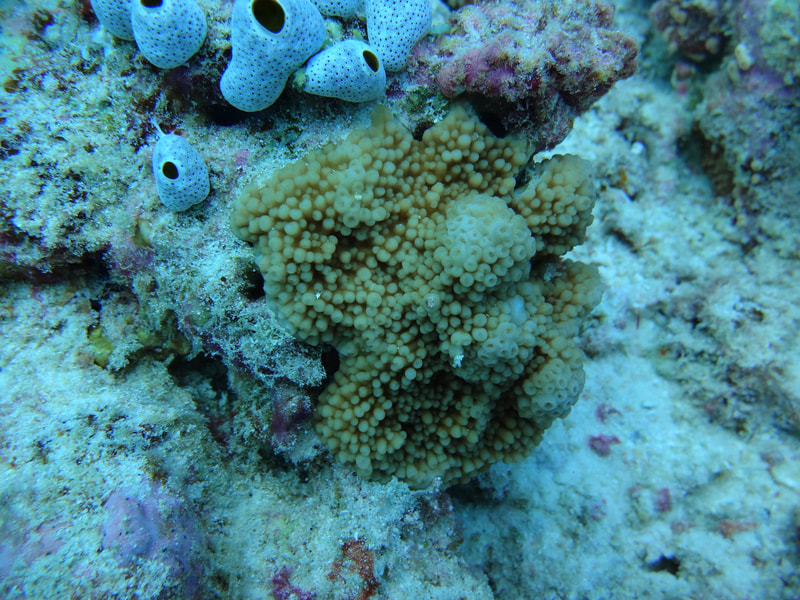 Columnar or Pillar corals are cylindrical in shape and they look like fingers. Columnar corals grow upwards. They differ from branching corals in that they do not have secondary branches.

DID YOU KNOW?
Isopora palifera is a vigorous and aggressive species of coral; where it comes into contact with other corals it will overgrow them and kill their tissues. It commonly grows on the submerged granitic boulders around Aride. 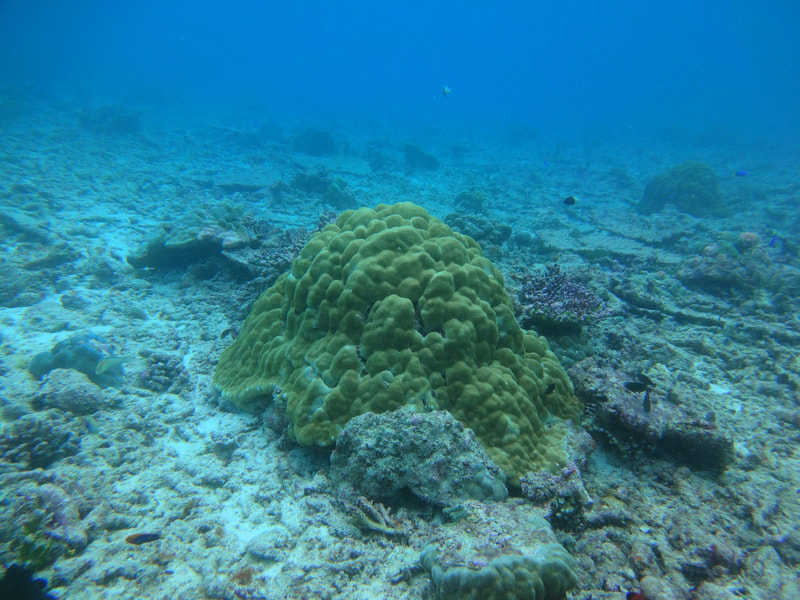 These corals look like domed boulders. They are slow growing and sturdy. They can withstand strong wave action.

DID YOU KNOW?
Massive corals build super strong structures that act as the foundations of coral reefs and play an important function. They take a long time to get big (grow about 1cm per year), but once they do, they offer outstanding protection to marine life and coastlines. Some of the Porites corals at Aride are 100 to 200 years old. 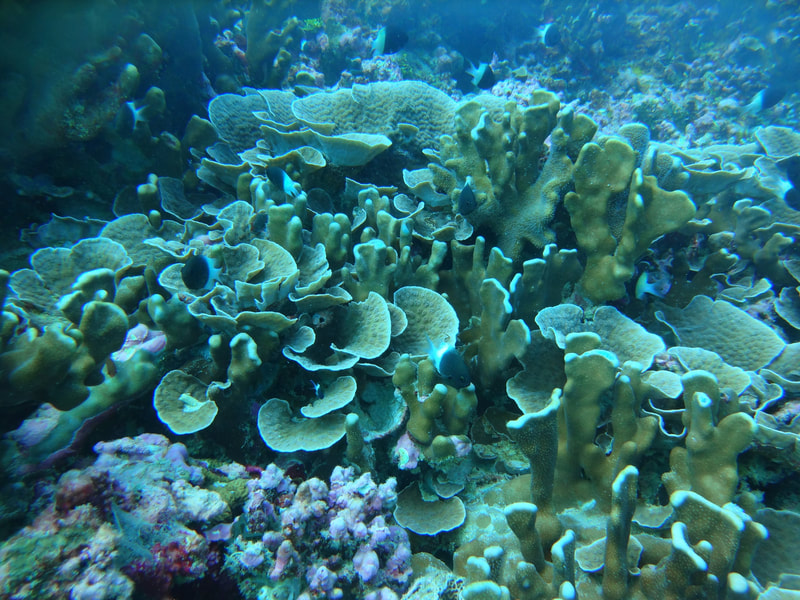 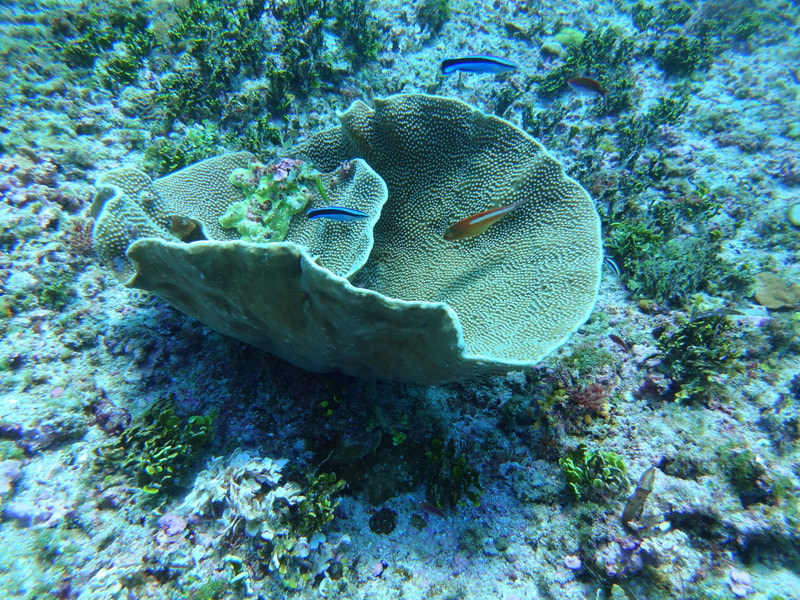 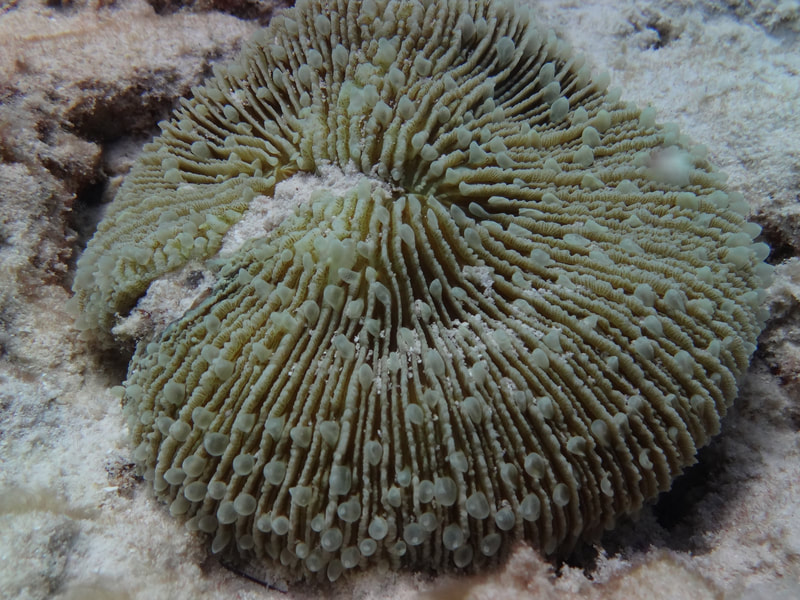 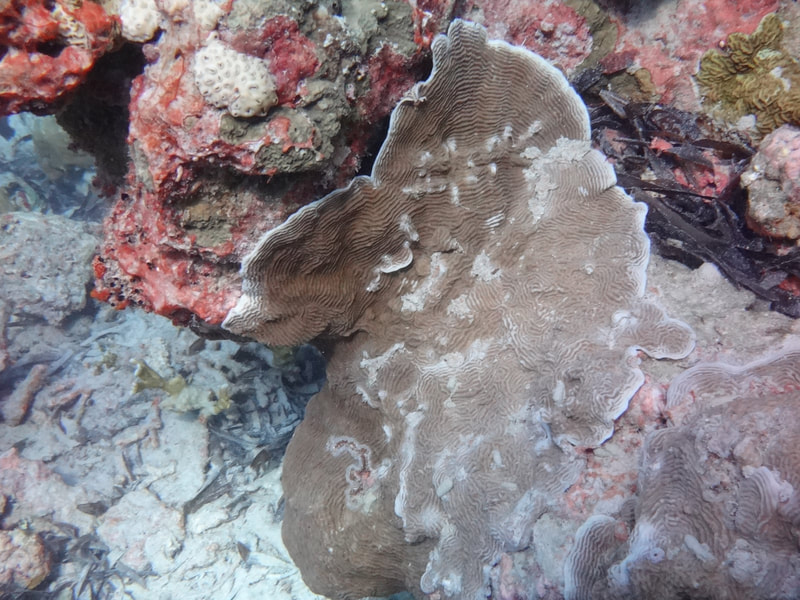 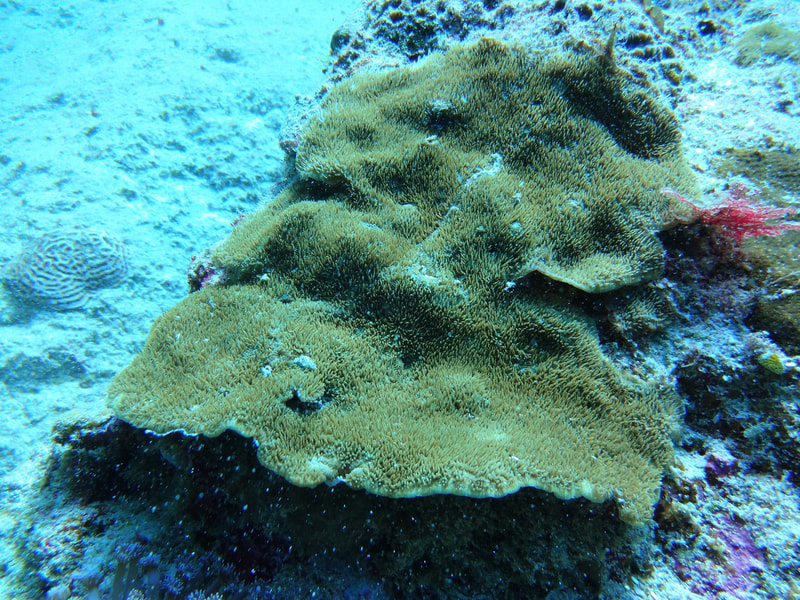 Encrusting corals do not grow upwards, but instead they grow outward, following the contours of the substrate. This form comes in variety of colours and typically adheres to rocky substrates.

DID YOU KNOW?
Encrusting corals can tolerate high flow environments much more than any other growth form of coral. You can find encrusting corals in nearly every underwater habitat, however, you will find the hardier varieties dominate reef walls or slopes which are prone to strong currents.

These corals form growth patterns like layered petals in an open flower. These folds increase surface area in order to obtain the maximum amount of sunlight so that their symbiotic algae (or zooxanthellae) can photosynthesize.

DID YOU KNOW?
The coral's folds and convolutions not only increase its surface area, but the spaces in between the whorls may provide shelter for fish and invertebrates. 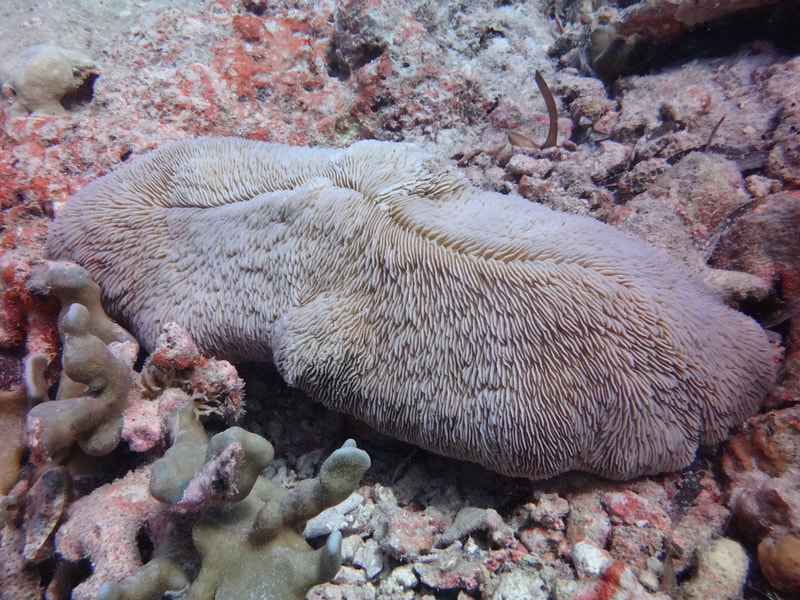 Not all corals are colonial; some are solitary. Free-living or mushroom corals are individual coral polyps. They are typically round, oval, or oblong. Some are free-living, while others are attached to a substrate.

DID YOU KNOW?
Some species of mushroom coral such as Fungia repanda are able to change sex. This is theorised to take place in response to environmental or energetic constraints, and to improve the organism's evolutionary fitness. 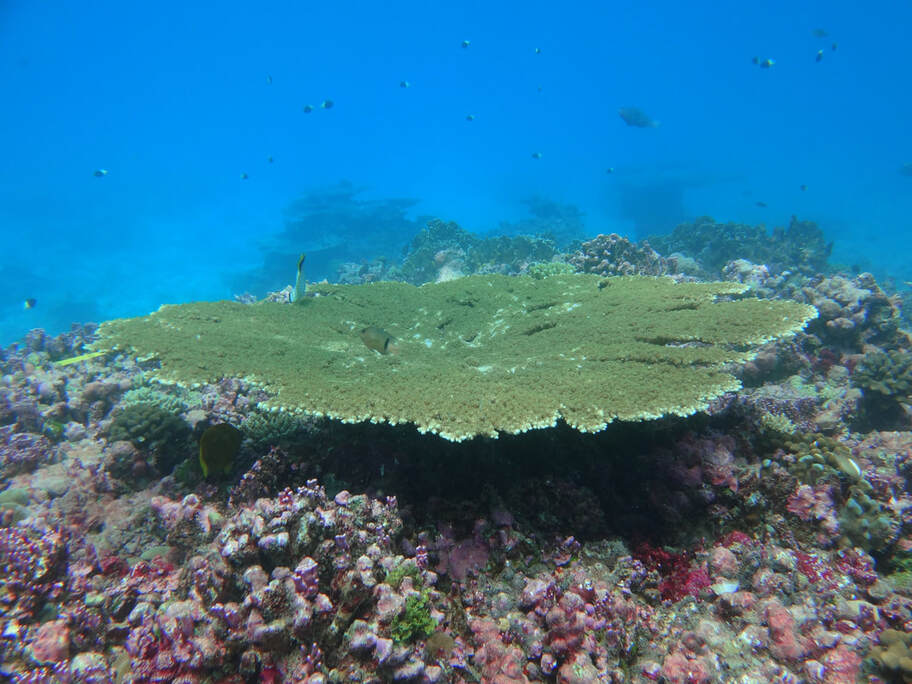 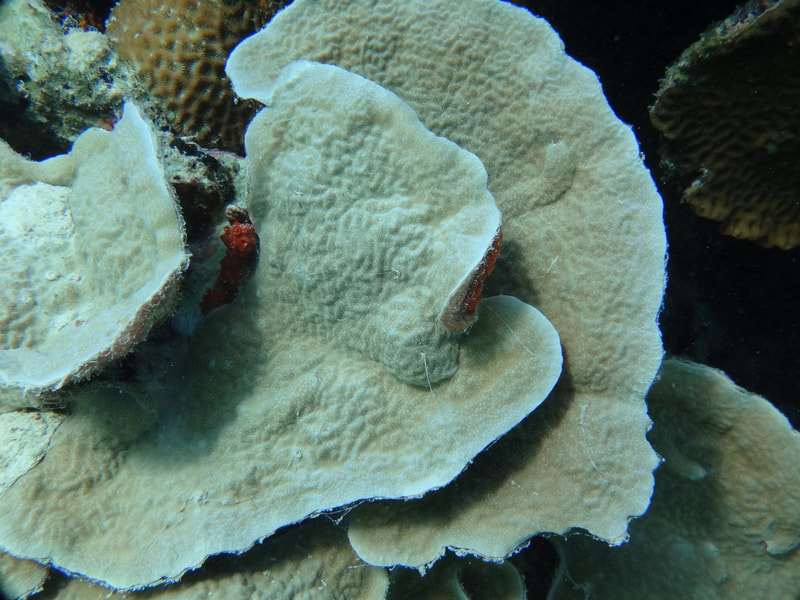 Plating or Tabular corals are thin, plate-like corals. They grow horizontally and look like shelves. Often, plating corals are found in deeper parts of the fore reef. Like foliose corals, they grow horizontally, increasing their surface area in order to obtain the maximum amount of sunlight, so that their zooxanthellae can photosynthesize.