Two species of dolphin are seen regularly in the waters around Aride Island and two species of whale have been recorded. Also, unidentified beakless whales have been seen south of Aride, almost certainly either Pygmy Killer Whale Feresa attenuata or Melon-headed Whale Peponocephala electra 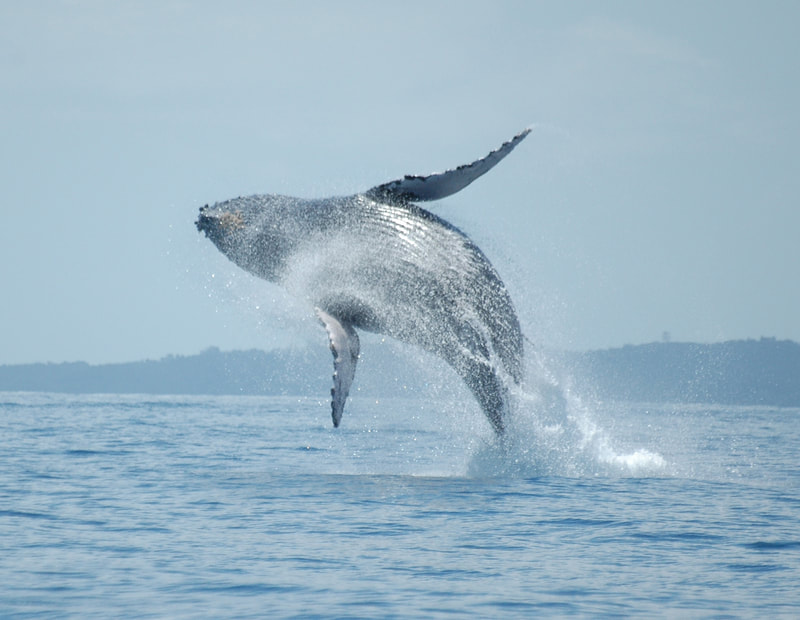 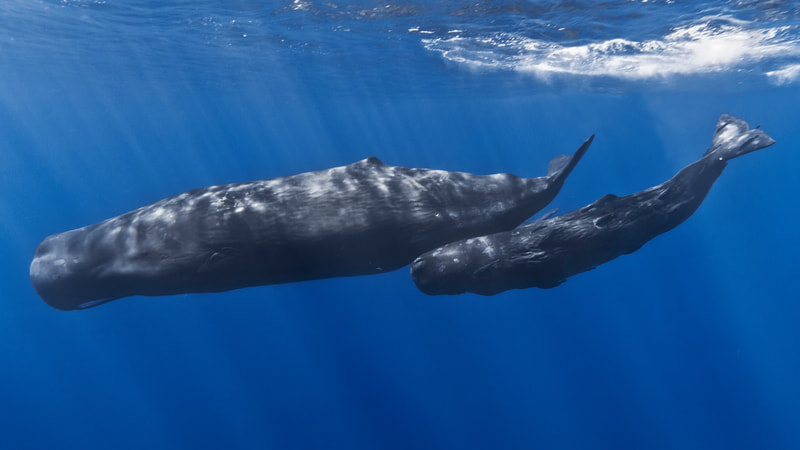 Humpback Whale Megaptera novaeangliae (left) has frequently been seen from the viewing point in the waters below the northern cliffs of Aride. This is a large species of baleen whale, adult males up to 14 m and females 16 m, weighing around 25–30 metric tons. The humpback has a distinctive body shape, with long pectoral fins and a knobbly head. It is known for its spectacular breaching behaviour.
Males produce a complex song lasting around 10 to 20 minutes, repeated for several hours at a time. All males in a group will produce the same song, which differs each season. Its purpose is not known, but it may help induce oestrus in females.
DID YOU KNOW?
Found in all oceans, humpbacks typically migrate up to 25,000 km per annum. They feed in polar waters and migrate to tropical or subtropical waters living off their fat reserves. The first individuals arrive in Seychelles waters from Antarctic waters around July. Humpback whales breed and pregnant mothers give birth to their calves in the Indian Ocean before returning around late September to feed in the Southern Ocean.
Sperm Whale Physeter macrocephalus (right) has been recorded south of Aride. This is the largest toothed whale and the largest toothed predator. Unusual among cetaceans, the sperm whale's blowhole is highly skewed to the left of the head and gives a distinctive forward-angled spray. Males are much larger than females averaging 16 metres but may exceed 20 metres with the head representing up to one-third of length. Plunging to depths of 2,250 metres it is the second deepest diving mammal. It has the largest brain of any animal on Earth, more than five times heavier than a human. Ambergris, a waste product from its digestive system, is used as a fixative in perfumes. Sperm whales hunt through echolocation. As loud as 230 decibels, their clicks are among the most powerful sounds in the animal kingdom. (Photo: Gabriel Barathieu, CC BY-SA 2.0, via Wikimedia Commons)
DID YOU KNOW?
Spermaceti, originally mistakenly identified as the whales' semen, is the semi-liquid, waxy substance found within the whale's head, which can hold up to 1,900 litres of spermaceti. It is proportionately larger in males. This may assist buoyancy. 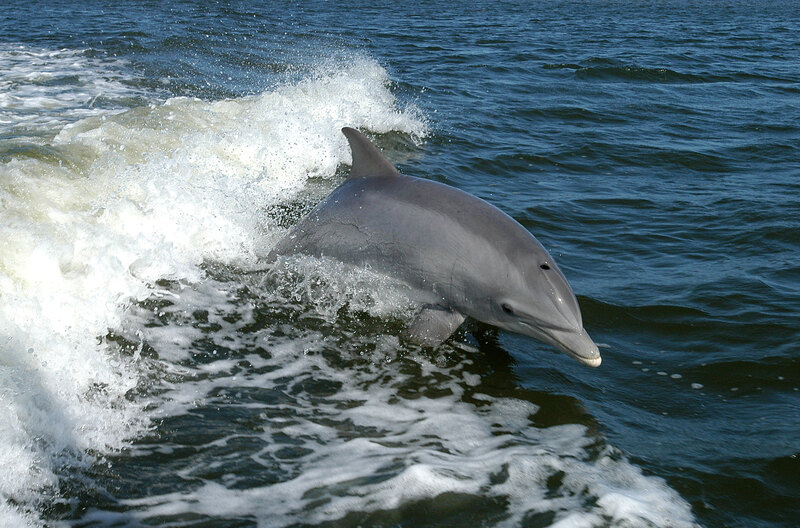 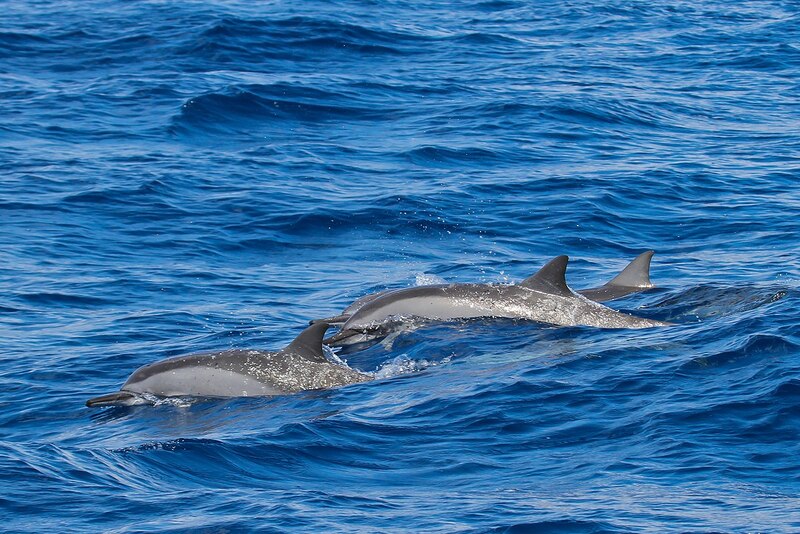 Bottlenose Dolphin Tursiops truncates (left) is the most common marine mammal around Aride, recorded year-round.  The common name derives from the scientific name Latin tursio (dolphin) and truncatus (truncated) in reference to the characteristic teeth. The Bottlenose Dolphin weighs about 300 kilos and can reach a length of just over 4 metres. They live for 40 years or more, females typically surviving 5–10 years longer than males. Whistles are used to maintain contact between members of a pod (especially mothers and young) and to coordinate hunting strategies. More complex whistles are used to avoid physical aggression when for example feeding at a single source, less dominant individuals giving way to avoid confrontation (Photo: NASA).
Spinner Dolphin Stenella longirostris (right) is a small, slender cetacean famous for its acrobatic displays. It spins along its longitudinal axis as it leaps through the air, apparently for the sheer joy of it, though social cohesion is probably important. The spinner dolphin is found throughout tropical and subtropical seas from about 40°N to 40°S. It favours coastal waters lose to islands. It feeds mainly on small fish, squid and shrimps, diving as deep as  300 metres to capture prey. A spinner dolphin leaps clear of the water, twisting its body as it rises, then descending to land on its side. A dolphin makes 2-5 spins in one leap, with variations described as nose-outs, tail slaps, flips, head slaps, salmon leaps and side and back slaps. (Photo:  Bennet Gevers, CC BY-SA 4.0, via Wikimedia Commons
DID YOU KNOW?
Many studies of Bottlenose Dolphin intelligence have shown they are capable of self-recognition, tool use (using sponges to access food sources out of reach), mimicry, use of artificial language and object categorization. They possess significantly higher encephalization levels than all  primates  except humans. This is  potentially  more  striking  given that many scientists believe that encephalization levels may be underestimated in some or all cetaceans.
Dolphins detect food by sight and echolocation (producing sounds and listening for the echoes from unseen objects). A burst pulse of clicking sounds is emitted in a focused beam in front of the dolphin. When the clicking sounds hits a fish or rock, they bounce back to the dolphin, revealing data on shape, size, speed, distance, and location.
Return to Marine